Scutellaria baicalensis (Scutellariae Radix) has been used to clear heat and to dry dampness in the stomach or intestines, which manifests as diarrhea or dysenteric disorder. In this study, we investigated the effective preparation of active components in Scutellariae Radix using the methods of solvent extraction and absorption fractionation for the development of new functional food or pharmaceuticals. The marker substances, baicalin, baicalein, wogonoside, and wogonin were directly isolated from the Scutellariae Radix. There chemical structures were elucidated by spectroscopic analysis. The Scutellariae Radix was extracted with hot water. To enhance yield of flavonoids in Scutellariae Radix, the hot water extract was dissolved in ethanol with concentration dependent manner. The precipitates were separated using centrifugal techniques at 10,000 rpm. Supernatant liquid was applied to the HPLC for quantification of major compounds. Separately, the hot water extract was absorbed on Diaion HP-20 resin. And then, the absorbed fraction was eluted with methanol for HPLC. The contents of baicalin, baicalein, wogonoside and wogonin in different treatment methods were analyzed by HPLC. Total amount of four major components were 16.9% in 50% ethanol extract, 21.7% in 70% ethanol extract, 20.5% in 90% ethanol extract, and 39.3% in absorbed fraction of Diaion HP-20 resin. In these results, we found that resin absorption method is suitable for the extraction of enriched flavonoids from Scutellariae Radix.

Scutellaria baicalensis GEORGI., skullcaps is a genus of flowering plants in the Labiatae family (Kim et al., 2014). S. baicalensis is a perennial growing to 0.3 m. It is in flower in from June to August, and the seeds ripen in September. The plant inhabits Sìchuan, Shandong in Chinese, east Russia, and entire region in Korea (Korea National Arboretum, 2014). Scutellariae Radix used in Korean traditional medicine is the root or the root from which the periderm has been removed of S. baicalensis GEORGI. (Lee et al., 2001). Scutellariae Radix was registered in one of the item in Korea Health Insurance Coverage. It has been prescribed single herbal medicine or herbal formula by Korean traditional physician. Moreover, the herb has been widely used as raw material in general food and functional food (Korean Ministry of Food and Drug Safety, 2013). Scutellariae Radix is characterized by having bitterness, and coldness. In the classic of traditional Asian medicine, bitterness dries dampness, and coldness clears heat (Bensky et al., 2004). The pharmacological actions of Scutellariae Radix focus on the lungs and somewhat less directly on the large intestine (Yang et al., 2013). Recently, the biological activities of Scutellariae Radix have been reported on anti-bacterial effect (Yun et al., 2012), anti-virus (Moghaddam et al., 2014), anti-inflammation (Kim et al., 2009), anti-allergy (Hsieh et al., 2007), sedation (Park et al., 2006), anti-hypertensive effect (Song et al., 2013), and antioxidation (Cao et al., 2011). In the chemicophysical study of secondary metabolites in natural products, baicalein (Horvath et al., 2005), baicalin (Ohkoshi et al., 2009), chrysin (Tong et al., 2012), oroxylin-A (Ku et al., 2014), oroxylin-α-7-O-glucuronide, wogonin, wogonoside (Wu et al., 2005), and skullcapflavone (Jang et al., 2012) were isolated and elucidated by spectroscopic method. According to the recent research, the ethanol soluble fraction of Scutellariae Radix inhibited melanin biosynthesis depending on ethanol concentration (Kim et al., 2012). The other study on extraction method reported that heating extract and microwave extract of the plant were show differently effects on anti-oxidation and neuro-protective activity (Lee et al., 2014). However, we couldn’t find the report on effective extraction method of enriched flavonoid fraction for industrialization of Scutellariae Radix. Therefore, it is important to develop the enhanced extract methods to yield a large amount of flavonoids from Scutellariae Radix. For this purpose, we isolated and elucidated 4 major flavonoids such as baicalin, baicalein, wogonoside, and wogonin. Moreover, we analyzed and compared the ethanol precipitation method and resin absorption method enhancing yield of 4 major flavonoids from Scutellariae Radix by HPLC.

The roots of S. baicalensis were collected from Yeosu in Jeollanamdo, South Korea. A voucher specimen (NBU-HPS- 032) of the plants was deposited in the herbarium of the Nambu University, Gwangju, Korea.

The dried roots of S. baicalensis (2.5 ㎏) were extracted with 85% methanol using sonication method for 3 hr. The extract was evaporated under reduced pressure to give a MeOH extract (220 g) (Eyela, Tokyo, Japan), which was suspended in water (1 L) and solvent-partitioned to give chroloform (CHCl3, 14.1 g), ethylacetate (EtOAc, 13.2 g), normal-buthanol (n-BuOH, 14.3 g) layer. The EtOAc and n-BuOH fractions were separated over a silica gel column (n-hexane: EtOAc = 1:1-9:1) to yield seven fraction. Fractions were chromatographed on a Diaion HP-20 (Mitsubishi Chemical, Tokyo, Japan) column chromatography (H2O: MeOH = 9:1-1:1) to give 4 compounds. Their structures were determined as baicalin, baicalein, wogonoside, and wogonin by spectroscopic methods (Wolniak et al., 2008).

Scutellariae Radix (200 g) were extracted with hot water at 90℃ for 3 hr. For the effective preparation of flavonoids in Scutellariae Radix, the hot water extract was filtered and was dissolved in 50%, 70%, and 90% ethanol concentration. The solutions were stood in 4℃ for 12 hr to precipitate macromolecules such as cellulose and protein. The precipitates were separated using centrifugal techniques at 10,000 rpm for 10 min. Supernatant liquid was evaporated under reduced pressure to give 50%, 70%, 90% ethanol soluble fractions (Eyela, Tokyo, Japan). Separately, 500 ㎖ of hot water extract was absorbed with Diaion HP-20 resin. And then the resin absorbed fraction was eluted with methanol and was evaporated (Table 1). 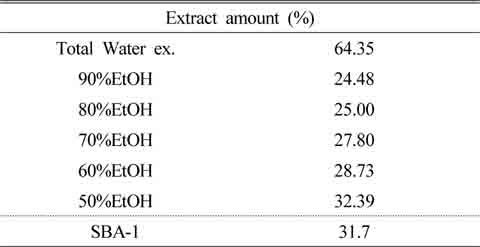 Baicalin, baicalein, wogonoside, and wogonin identified 4 marker substances based on spectroscopic methods were dissolved in methanol for HPLC. The standard stock solutions were prepared by dissolving 2.5 ㎎ of baicalin, 5.1 ㎎ of baicalein, 3.0 ㎎ of wogonoside, and 2.5 ㎎ of wogonin in 10 ㎖ of methanol. The standard solutions of 5 different concentrations were applied to HPLC for calibration curve of marker substances. The ethanol soluble fractions (10 ㎎) and resin absorbed fraction (10 ㎎) were dissolved in 5 ㎖ of mobile phases (acetonitrile: 0.5 M phosphoric acid 1: 1) and were applied to the HPLC for quantification of major compounds such as baicalin, baicalein, wogonoside and wogonin. HPLC analysis was conducted using a Waters system (Waters Corp. Milford, MA, USA) consisting of binary-solvent delivery pump (Waters 1525), UV/Visible detector (Waters 2487). UV absorbance was monitored at 280 ㎚. Quantification was carried out by integration of the peak areas. Injection volume was 10 μl. Chromatographic separation was performed on an YMC ODS a reversed-phase column (250 × 4.6 ㎜, 4 ㎛, YMC, Japan). The mobile phases consisted of acetonitrile (A) and 0.1 M phosphoric acid (B) gradient elution (0 min, 20:80; 20 min, 70:30). The mobile phase flow rate was 1.0 ㎖/min.

S. baicalensis is a well-known Korean medicinal herb which has been used for treating gastroenteritis and jaundice. In this study, we conducted the isolation and identification of 4 marker substances in the plants. And then, we established the effective extraction method of enriched flavonoids fraction using the ethanol precipitation and resin absorption method.

Column chromatographic separation of the 85% MeOH extract from the roots of S. baicalensis let to isolation of known flavonoids 1-4 (Fig. 1), which were identified as compound 1 (baicalein), compound 2 (wogonin), compound 3 (baicalin), and compound 4 (wogonoside) by comparison with the published values (Wolniak et al., 2008). Compound 1-4 were obtained as a yellow powder and 1H-NMR and 13C-NMR data were showed the typical aromatic compounds. Proton peaks with 1-2 Hz coupling constant in δ5-9 were generally assigned aromatic aglycone protons in 1H-NMR (Table 2). In 13C-NMR, carbon peaks of δ 80-185 were generally assigned aromatic aglycone carbons (Table 3). 5.24 ppm (J = 6.5 Hz) and 5.09 ppm (J = 6.6 Hz) were identified anomeric protons of sugar moiety. Also the peaks of 70-80 ppm in 13C-NMR were assigned the sugar carbons. 61.2 ppm and 60.9 ppm in carbon NMR and 3.84 ppm (3H, s) and 3.88 ppm (3H, s) in 1H-NMR were assigned the methoxyl group of wogonin and wogonoside, respectively. 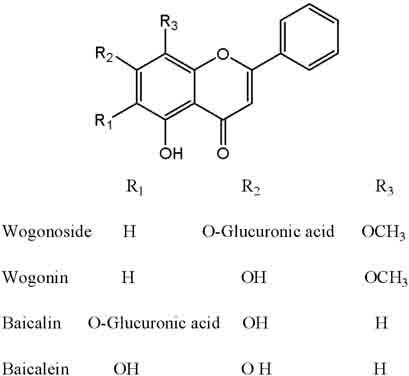 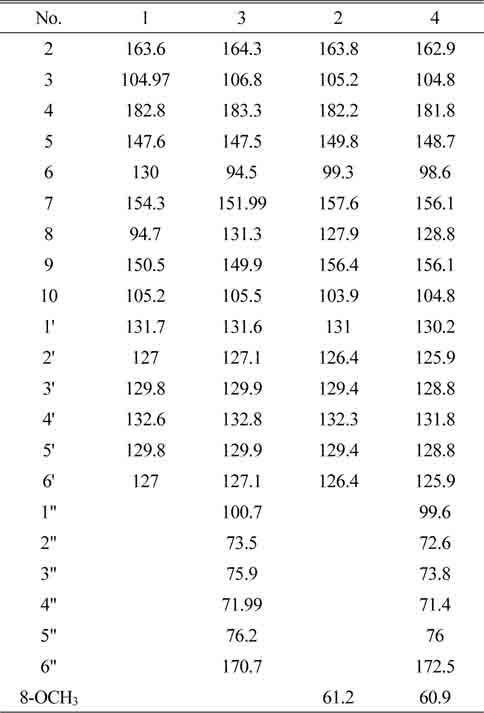 Flavonoids, a group of plant polyphenols have been shown to employ positive effects on human health and play a key role in prevention and/or treatment for inflammation (Arweiler et al., 2011) and cardiovascular disease (Tan et al., 2014). Flavonoids of S. baicalensis are important beneficial components of food, functional food, pharmaceuticals and cosmetics due to their biological activities such as anti-radical (Wozniak et al., 2004), anti-allergic (Jung et al., 2012) and anti-bacterial activity (Yun et al., 2012). However, their commercial applications are limited due to low consistency of active components in commercial extracts and low availability for a living organism. In spite of this, the components present in the plants are usually processed as by-products, resulting in environmental pollution. One of the main reasons for this is the absence of effective fractionation procedures to obtain the flavonoids from the plant. Fractionation of bioactive compounds from plant materials with a solvent and/ or resin are conventional operation applied in many industrial processes. It is obvious that medical concern in plants derived drugs has led to an increased need for ideal fraction methods, which could acquire the maximum of the bioactive ingredients in a shortest processing time with a low cost. Recently, microwave extraction (Zill et al., 2009) and ultrasonic-assisted extraction method (Xie et al., 2014) have been known to decrease extraction time and increase extraction yields in many vegetable materials.

The 4 marker substances isolated from the plants were used to the standard materials for HPLC. We conducted the ethanol precipitation extract and resin absorption extract from Scutellariae Radix to develop the new extraction method enhancing yield of flavonoids (Scheme 1). And we tested the quantitative analysis of major flavonoids of the solution from different extraction method. The HPLC chromatograms are shown in Fig. 2. The profiles of each compound were identified in the ethanol extract and Diaion HP-20 resin absorbed extract: baicalin (3, tR: 9.08 min), wogonoside (4, tR: 10.95min.), baicalein (1, tR: 15.08), and wogonin (2, tR: 19.05). To analyze the amounts of the four active compounds in the solution, linear regression analysis for each compound was performed by the external standard method. All marker substances showed good linearity (r > 0.99). The amounts of each compound based on the regression equation are shown in Table 4. As a result, the major components in 50% ethanol extract were found to be baicalin 10.2%, wogonoside 5.0%, baicalein 1.3%, and wogonin 0.5%. The total amount of 4 major flavonoids was 16.9% in the 50% ethanol extract. The contents of 4 compounds in the 70% ethanol extracts were as follows: baicalin 12.6%, wogonoside 6.5%, baicalein 1.8%, and wogonin 0.8 % (total 21.7%). Total amounts of 4 major components of 20.5% were found in 90% ethanol extract. On the other hand, 4 marker substances in the resin absorption fraction (Diaion HP-20) were found to be baicalin 21.0%, wogonoside 12.7%, baicalein 4.0%, wogonin 1.5% (total 39.3%) (Table 4). The results that the Diaion HP-20 resin absorption method is more efficient than ethanol precipitation method to extract flavonoids 1-4 from Scutellariae Radix. 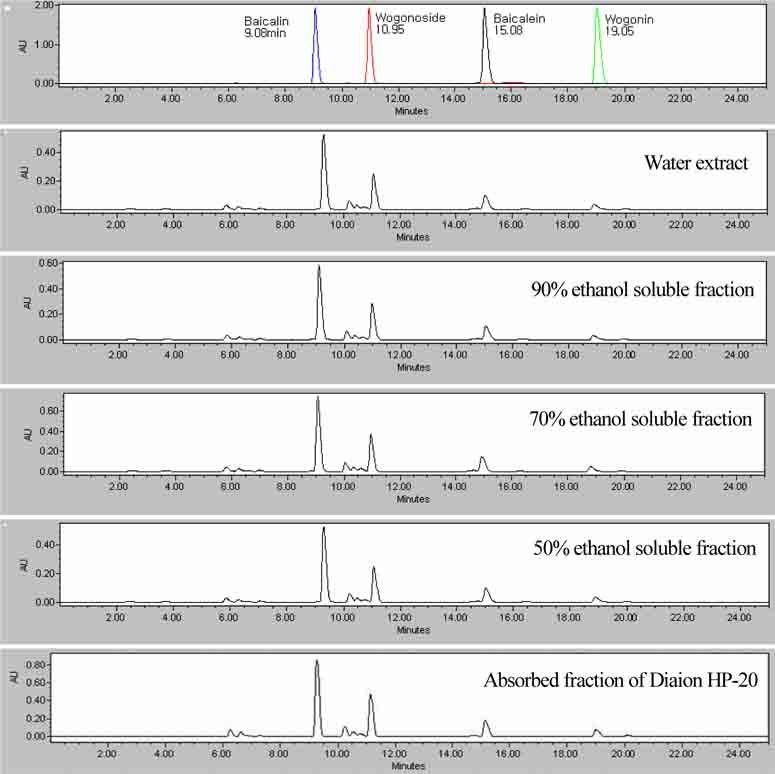 In this study, we found effective fraction method of high flavonoids contents in S. baicalensis for commercial application using absorption method by Diaion-HP 20 resin. Diaion HP-20 used in reverse phase chromatography is a non-polar polyaromatic adsorbent resin. Diaion HP-20 had spherical particles is considered as the most effective adsorbent to extract secondary metabolites from natural products to eliminate sugar and to separate traces heavy metal ions (Korda et al., 2006). In conclusion, the present study showed that resin absorption method is useful as an extraction method for high flavonoid fractionation in S. baicalensis. Furthermore, we expect that this method could be applicable to the industrialization of functional food and herbal drug. In spite of these, further studies are required to compare with resin absorption, microwave extraction and ultrasonic-assisted extraction methods for the effective flavonoids fraction from natural sources.