Theoretical Study of the Hydroalumination Reaction of Cyclopropane with Alane

The hydroalumination of cyclopropane has been investigated using the B3LYP density functional method employing several split-valence basis sets. It is shown that the reaction proceeds via an intermediate weakly bound complex and a four-centered transition state. Calculations at higher levels of theory were also performed at the geometries optimized at the B3LYP level, but only slight changes in the barriers were observed. Structural parameters for the transition state are also reported.

Aluminium and boron belong to group III in the periodic table but there is large difference in their chemistry.1−3 Only a few hydrides of aluminium are known along with monomer AlH3 and dimer Al2H6 while boron has a richer chemistry45 in the inorganic as well as organic chemistry. Hydrides of aluminium are good reducing agents and used as reducing agent for functional groups, hydroalumination of alkenes, alkynes, allylic rearrangement in organic chemistry.6

The addition of the Al–H bonds to the double or triple bonds of unsaturated organic compounds (hydroalumination) finds widespread application as a very powerful method for the reduction of specific substrates in organic synthesis. 7−15

The addition of an alkene or alkyne into the Al–H bond of an alkyl aluminium hydride is a key first step in the route to the formation of a new carbon–hydrogen bond via hydroalumination. For further understanding Bunden and Francl16 used ab initio molecular orbital methods to probe the reaction path for the addition of carbon–carbon multiple bonds into Al–H bonds.

Several theoretical studies of the hydroalumination of ethylene and acetylene have appeared. It has been suggested that the reaction involve the formation of a symmetric π-complex intermediate leading to the formation of addition product via a four-centered transition state. Exploratory work by Egger supports these results.17 The alternative π-complex transition state proposed by Eisch;18 however, is inconsistent with both the theoretical studies and the experimental work of Egger and others. In 1981, Grophen and Haaland characterized the transition structure for the addition of acetylene into the Al–H bond of alane.19 One year later, they have reported the transition structure for the parallel addition reaction of AlH3 with ethylene.20 Sakai described a push-pull two-stage mechanism for the similar reaction of AlH3 with ethylene.21 Sakai’s charge analysis on hydroalumination of ethylene suggested initial Al- C bond formation occurred which is found rapid than the breaking Al–H and the making of C–H bonds. Higashi et al. Investigated the reverse reaction of AlH3+C2H4 in the context of its application to chemical vapor deposition.22 They have reported a four-centered alane-ethylene transition structure using a more sophisticated theoretical model, although no substantial differences were found.

Houk et al.2324 have examined the reaction path for the analogous hydroboration reaction with a variety of substrates. The intermediates, and transition structures found in these studies are consistent with those for the hydroalumination pathway described earlier. Qualitatively, the energetics of these pathways compare well with those from the simple hydroalumination reaction studied earlier. Schleyer and Hommes26 have examined the structure of the transition state for the reaction of dimethylborane and ethylene using correlated methods and suggest that the TS has a threecentered rather than four-centered structure. Chey et al.27 have previously characterized the π-complex intermediates for hydroalumination of alkenes. In 1999 Bunden et al.28 have studied the transition state for the carboalumination of alkene and alkynes at ab initio level of theory. They have shown that these reactions are essentially nucleo philic attacks by alkyl anions on the substrate activated by lewis acid substituents.

Togni and Grutzmacher29 in 2001 have proposed metalcatalysed hydroalumination reactions of alkenes and alkynes and suggested that the catalytic hydroalumination of alkenes and alkynes is the potential tool for the functionalization of carbon–carbon multiple bonds. Among the different catalytic systems titanium (Ti), Zirconium (Zr) and Nickel (Ni) catalysts have found the widest application. Pankratyev et al.30 has recently carried out a DFT study on the mechanism of olefin hydroalumination by XAlBu2i in the presence of Cp2ZrCl2 catalyst for the mechanism of intermediate formation.

All calculations have been performed on a PC running WINDOWS using the Gaussian 9832 suite of programs. The B3LYP hybrid density functional was used for calculation at DFT33 level using several split-valence basis sets. The geometries of the reactants (AlH3 and C3H6), intermediate complex (LM1), transition state (TS) and the product (LM2) were optimized at this level of theory using 6-31G**, 6-31++G**,34−40 cc-pVDZ and aug-cc-pVTZ41−45 basis sets. The nature of each stationary point was confirmed in each case by frequency calculations; all the minima were verified to have all positive frequencies and the transition state to have only one imaginary frequency. MP246−50 calculations were also performed using the chosen basis sets for comparison purposes. Single point (SP) calculations were as well performed at the geometries optimized at the B3LYP/6-31G** level at the CCSD, CCSD(T), QCISD, QCISD(T)51−55 and MP4SDQ levels to see if any significant change in the energetics is observed.

The geometries of the reactants (AlH3 and C3H6), the intermediate complex (LM1), the transition state (TS) and product (LM2) optimized at the B3LYP/6-31G** level are shown in Fig. 1. The optimized geometrical parameters for these species are collected in Table 1. Along the reaction path of cyclopropane and alane, three stationary points are located. The first is an intermediate complex (LM1) between the reactants, which is found to be more stable than the reactants by 5.45 kcal mol−1, the second a transition state (TS) and third the product (LM2). 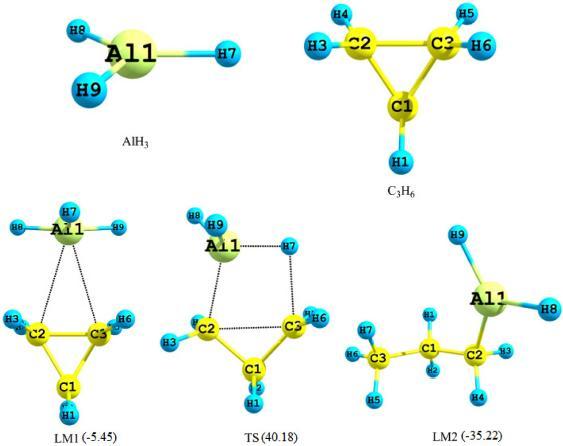 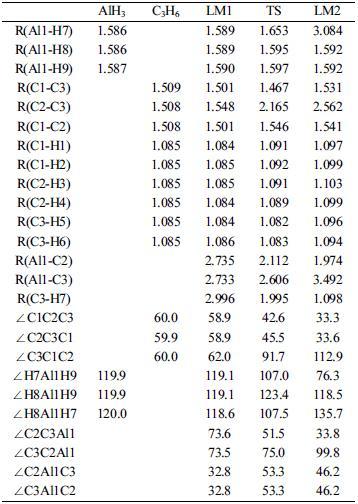 The alane cyclopropane complex is found to be a stable intermediate along hydroalumination pathway. The carbon– carbon (C2–C3) bond length is not significantly affected by binding to the aluminium in the intermediate complex with cyclopropane while the considerable increase in the C2–C3 bond in the transition state has been noted. 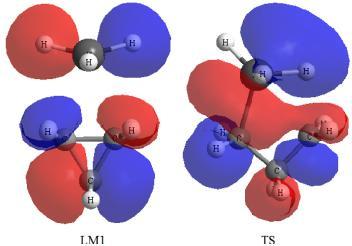 Fig. 2.HOMOs of complex (LM1) and transition state (TS) for the hydroalumination of cyclopropane at B3LYP/6-31G** level of calculation.

The energies relative to the sum of the reactants, C3H6 and AlH3 (in kcal mol−1) obtained are summarized in Table 2. The aluminium trihydride and cyclopropane reactants are collapsed without the energy barrier to form weakly bound intermediate complex. This intermediate then has surmount a barrier of the order of 45.63 kcal mol−1 via a four-centered transition structure before forming the more stable (about 35.22 kcal mol−1) cyclopropane-alane addition product at B3LYP/6-31G**level of theory and basis set.

Even though the geometry of the intermediate does not change substantially as larger basis sets are used for optimization, the energy of complexation changes considerably a variation of nearly 2 kcal mol−1 variation for the different theoretical models used. The larger basis set augcc- pVTZ gave calculated binding energy of the complex of −4.03 kcal mol−1 with −5.45 kcal mol−1 with the 6-31G** basis with a B3LYP functional.

The computed barriers (ETS) are much higher than the available experimental activation energy of about 4.9 kcal mol−1 reported in the case of diethyl aluminium hydride to ethylene.56 Theoretically, Grophen and Haaland1920 reported the barriers of 14.0 and 11.9 kcal mol−1 for the hydroalumination of acetylene and ethylene respectively. The computed values for cyclopropane are higher than these too.

Calculated relative energies in kcal mol−1 of the stationary structure along the reaction pathway at DFT and MP2 levels using different basis sets are given in Table 2. Single point energies computed at higher levels of theory for structures optimized at the B3LYP/6-31G** level of theory and basis set are listed in Table 2. While there are substantial variations in the barriers, the energies of the product are not very sensitive to the level of calculations.

IRC calculations have been performed and confirm that the transition structure (TS) does fall on the path between the complex (LM1) and the product (LM2). The IRC plot is displayed in Fig. 3 shows the transition structure (TS) moving downhill towards the complex (LM1) on one side and the product (LM2) the other. Frequency calculations have been performed on all stationary structures. All positive frequencies are found for the stable species (AlH3, C3H6, LM1 and LM2) and one imaginary frequency (798 cm−1) is observed in the case of TS. 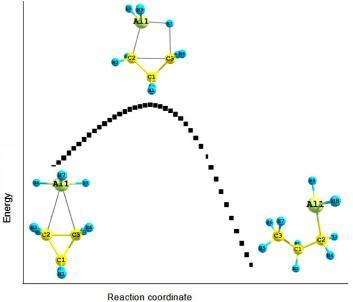 The qualitative trends found parallel those found in the B3LYP/6-31G** calculations, attesting to the essential validity of this DFT scheme in such studies. It may also be noted that the MP2 energies of the complex (LM1) are somewhat lower than in the other cases and that the values show less variability with the basis set chosen. These results suggest an energy barrier less than 50.46 kcal mol−1 of energy barrier calculated at the MP2/6-31G** level of theory and basis set, making the reaction viable; however, no experimental results are available for comparison.

In summary, we have studied the stationary structures involved in the hydroalumination of cyclopropane with alane. Our study posits a four-centered transition state for this reaction in contrast to the recent studies on the hydroboration of cyclopropane, in which three-centered transition state has been reported. It is also hoped that studies on reactions involving cyclopropane and its derivatives with other hydroalumination reagents will clarify the situation.