Charge Transfer between STM Tip and Au(100) in Dry, H2O, and D2O Atmospheres

Charge transfer between STM tip and Au(100) has been investigated by using a Scanning Tunneling Microscopy (STM) technique in dry, , and atmospheres. Dry atmosphere was indicated by humidity as low as 5 % and high humidity as high as 98% was managed by injecting and to the chamber. The current decayed more slowly in high humidity than in dry atmosphere. The plateau currents were found to appear at separations larger than ca. where the current decay stopped depending on applied bias voltages. The polarity dependence was observed at the STM junction between Pt-Ir tip and the gold. On the contrary, little dependence was seen at the one between Au tip and the substrate electrode.

Charge transfer is of fundamental importance to many processes in interfacial chemistry and electrochemistry in particular.1-12) A characteristic of direct electron tunneling is well understood under ultrahigh vacuum environments but that of charge transfer is complex and far from being complete under condensed phases at interfaces. Electron tunneling in aqueous environment is an important phenomenon, which is directly related to the different types of charge transfer events in chemistry and biology. In addition, fundamental operating principle of electrochemical scanning tunneling microscopy (STM), although the technique has been extensively used in many different conditions, is still not completely understood.4,9,12)

In our previous efforts to understand charge transfer processes across thin water layer at conducting substrates, we have reported the electron transfer between a Pt-Ir tip and Au(111) surface through interfacial water.10-12) We found that the value of barrier height at relative humidity 5-80% was 0.95 eV, which was independent of the tip-sample distance and the applied bias voltage. On the other hand, the electron transfer at low bias voltage (as low as 0.03 V) in saturated humidity (> 95%) was similar to that at low relative humidity. However, for high bias voltage (0.1-0.5 V), the current decayed non-exponentially. In addition, we observed the plateau current caused by the electrochemical processes and it was dependent on the applied voltage as well as its polarity.

We extended the investigation of electron transfer using interfacial D2O and gold tip.12) We found that the plateau currents in D2O saturation and bias voltages above ∣0.4∣V were measured to be 10-20% lower than that in H2O saturation. The polarity dependence of the electrochemical currents between a Gold tip and Au(111) surface was not observed.

In the present work, we examined the charge transfer between Au(100) with Pt-Ir and Gold tips using STM in dry, H2O, and D2O atmospheres by measuring current behaviors as functions of the applied bias voltage and the tip-surface distance.

The apparatus and the sample preparation procedure have been described elsewhere.10,11) The experiments were carried out by using Nanosurf STM at the temperature of 23 ± 2℃. Platinum/iridium and Gold tips were prepared mechanically from Pt/Ir and Au wires for the STM experiment. A sample stage was kept in an environmental chamber. The chamber was flushed with argon gas. The relative humidity inside the chamber was controlled by wet paper. The system was left for 1- 10 h to stabilize in the given relative humidity and to avoid thermal drift before the measurement with a tip.

Current versus distance characteristics were measured in the following way: an initial current was held at 5 nA, which had been obtained through a constant current feedback for the optimum detection range of changes in current with the distance. The bias voltage with respect to the tip was adjusted to the fixed value that was selected in the range between −2 and 2 V. For a measurement, the tip was pushed by 0.3 nm towards the sample after the feedback was switched off. Then, the tip was rapidly withdrawn from the sample and the resulting current in the range 10-0.001 nA was recorded as a function of the distance perpendicular to the surface. Afterward, the tip was moved back to its original position, and the feedback loop was enabled again. Under these measurement conditions, current changes with the smaller standard deviations were obtained. For each bias voltage value, this process was repeated ~200 times, and then the data were averaged. The z scale, which is perpendicular to the surface, was calibrated using monatomic steps on the Au surface.

Fig. 1 shows logarithmic tunneling current versus distance characteristics measured on the Au(100) surface with Pt-Ir and Gold tips at relative humidity near 5% and at bias voltages of 0.1 V. The equilibrium position of 5 nA is referred to zero (0) point in the figure. The apparent barrier heights were obtained to be as much as 1.25 ± 0.06 eV for Pt-I r t ip and 1.05 ± 0.12 eV for Gold tip. The values of the apparent barrier height at this humidity are low compared to that in ultrahigh vacuum (UHV).10,12,13,14) The difference in tunneling environment can be a major contribution to these values. In addition, the tip-surface interactions can also affect the values of barrier height for every experimental condition.15) 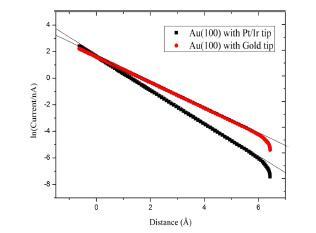 Fig. 1.Tunneling current versus distance characteristics measured on Au(100) surface with Pt-Ir and gold tips at relative humidity near 5%. The tunneling current is shown in logarithmic scale. The zero point refers to equilibrium position of 5 nA.

The different values of barrier height for gold tip compared to Pt-Ir tip may be caused by materials difference but also differences in tip shape,15) surface impurities,15) local density of states,16) and conductance. 16-18) The apparent barrier height is also well known to depend on the local work function,13,19) and the work function of Pt is larger than that of Au.19) The present results are in agreement with the reported tendency that the apparent barrier heights measured with a Pt tip were larger than those measured with a Au tip for the Au(111) substrate electrode.20)

The currents observed with a Pt/Ir tip as a function of tip bias voltages at relative humidity up to 98% are shown in Fig. 2(a) for positive tip bias and Fig. 2(b) for negative tip bias. Each value is the average (with the standard deviations) of many experiments over different locations. The plateau currents occurred because there were electrochemical processes through thin layers of water inside STM junction.10-12) The currents at separation of tip-sample larger than ca. 5 Å depended on applied bias voltage. The plateau currents were plotted as a function of applied bias between the two electrodes in Fig. 3.

Fig. 2.Tunneling currents measured at low humidity (−•−, LH (0.1 V)) and at high humidity as relative humidity up to 98% for various bias voltages, as indicated in the inset on Au(100) with Pt -Ir tip. 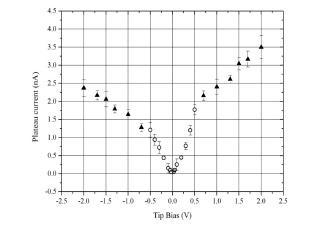 Fig. 3.Electrochemical plateau current (10 Å) as a function of tip bias voltage on Au(100) with a Pt-Ir tip at relative humidity as high as 98%.

An asymmetry in plateau current with respect to the applied bias polarity on Au(100) with a Pt-Ir tip is seen in Fig.3. The magnitude of plateau current at the bias voltages above 0.3 V was higher than that at the bias voltages below -0.3 V. This may be caused by electrochemical reactivity involved, which depends on the surface property of electrode materials.11) On the contrary, the asymmetry would not be sufficiently effective to be differentiated at the low bias voltages of the electrode materials employed.

To see the effect of electrolyte on the plateau current, H2O was replaced with D2O. Fig. 4 shows that the plateau currents in the D2O atmosphere with Pt/Ir tip were lower 10-15% than those in H2O atmosphere. The mass of H2O is 18, while that of D2O is 20 and there appears to be more than the mass effect to explain the observed phenomena. The electrochemical currents originating mostly from the processes of OH- (OD-) or H2O (D2O) caused the observed difference, especially on the positive surface with different conductivity between H2O and D2O.11,12) 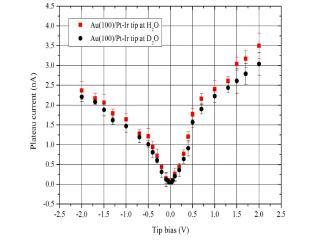 Fig. 4.Electrochemical plateau current (10 Å) as a function of tip bias voltage on Au(100) with a Pt-Ir tip in H2O and D2O saturations. 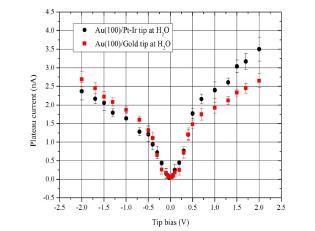 The STM technique was used to study charge transfer in dry and high humidity atmosphere where thin layers of water formed between STM tips (Pt-Ir and Au) and Au(100).