Fluoride ion sensing has drawn growing attention over the last decades1 due to its great potential for industrial and biological applications.1f,1h While conventional methods of fluoride sensing such as ion selective electrodes hold their ground, novel approaches are being introduced and hence progresses made in terms of selectivity and sensitivity.2-5 There are, however, few receptors which “truly” differentiate fluoride over other anions, such as chloride, phosphate or nitrate. These anions can, in principle, compete with fluoride ion under the most synthetic receptor schemes based on the specific Lewis acidbase interaction, or the designed hydrogen-bonding. The binding events have, then, been converted into an electrochemical or optical response. These efforts have enjoyed successes and, in some cases, have resulted in the ability to visually detect fluoride ions.4,5

On the other hand, fluorescence remains as an important detection method due to its high detection limit. The fluorescence response can be further amplified by utilizing the facile and efficient exciton-transporting properties of conjugated polymers (so-called the ‘molecular wire approach’).6 These methods were originally demonstrated using electron-transfer quenching and variations on this scheme have been used to create a number of chemical and biological sensory methods, most of which involve changes in the emission intensities. In spite of these successes, it is generally preferable for a fluorescence signal to involve a new emission at a different wavelength rather than a modulation of an existing signal. The advantage of the latter approach is that a new signal is inherently easier to detect than an intensity change. Furthermore, new analyte-triggered emissions may offer high specificity and low background.

In a previous communication, we have demonstrated the fluoride-induced lactonization scheme to coumarin and its application to fluoride-sensing. Herein, we present in detail the development of this methodology and further extensions. Our strategy is based on the specific affinity of fluoride ion to silicon, and hence highly selective for fluoride ion.7

We have previously developed a fluoride-sensing system in which the fluoride triggered Si-O bond cleavage resulted in the formation of highly fluorescent coumarin derivatives (Scheme 1).8

Coumarin and its derivatives constitute an important class of organic laser dyes due to their large absorption cross-section and high radiative quantum yields.9 Another important feature of coumarin is the tunability of its photophysical properties over a wide wavelength range through substituent effects. The absorption spectra of the 7-amino substituted indicator 2 (abs. max. 386 nm) and its cyclized product 2a (abs. max. 417 nm) were, indeed, red shifted significantly compared to those of the unsubstituted analogues 1 (abs. max. 322 nm) and 1a (abs. max. 334 nm). The originally non-fluorescent compounds 1 and 2 displayed strong fluorescence upon cyclization to coumarin derivatives 1a (emission max. 415 nm; Φ = 12%) and 2a (emission max. 450 nm; Φ = 81%), respectively (Table 1).

Scheme 1.Fluoride-induced cyclization of the indicators (1 and 2) led to the fluorescent coumarin derivatives (1a and 2a). 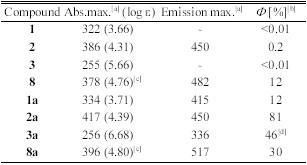 Synthesis of the indicators involves a two-step sequence, namely, silylation of the corresponding 2-hydroxy benzaldehyde, followed by a condensation reaction under the titanium-mediated Knoevenagel conditions (Scheme 2).8,10 To avoid a possible trans-cis isomerization of the double bond, we used diethyl malonate to introduce the compounds with the symmetrically substituted double bond, 1 and 2. This strategy allowed us to keep the ester group close to the reactive phenoxide, which is a key requisite for lactonization to occur before it is converted into a phenol.

Scheme 2.Synthesis of the indicators 1 and 2.

Scheme 3.Fluoride-induced cyclization of the indicator 3 led to the fluorescent molecule 3a with a planar structure.

Although the absorption spectra of the cyclized product 3a did not show a bathochromic shift, compared to that of its precursor 3, the transformation from a flexible chromophore to a rigid extended one caused a dramatic increase in the emission efficiency by reducing the nonradiative rate (Φ= <0.01% for 3 and 46% for 3a; Table 1). In fact, the indicator 3 was non-fluorescent as the aromatic rings in 3 undergo geometrical (vibrational-rotational) changes in the excited state that facilitate nonradiative processes. A strong fluorescence was observed only after the cyclization, induced by fluoride ion, which eliminates rotation about the phenyl-phenyl bond.

Both fluoride-induced coumarin formation (Scheme 1) and aromatic planarization (Scheme 3) schemes were quantitative and irreversible. Monitoring the reaction in situ by measuring the fluorescence intensity revealed that the rate of both cyclization reactions (2 to 2a and 3 to 3a) was found to be first order in 2 and 3, respectively, and independent of fluoride. This result indicates that the silyl cleavage (or fluoride association with the silyl group) is fast and that the cyclization is the slow step for both reactions. There was, however, a significant increase in the rate for the aromatic planarization scheme (k = 2 × 10-4 s-1 for 2 to 2a and 2 × 10-2 s-1 for 3 to 3a). Much faster nucleophilic substitution of the phenoxide with highly reactive benzyl iodide in 3, compared to the nucleophilic acyl substitution in 2, was ascribed to this result. Indeed, the cyclization of 3 to 3a effected by fluoride ion (in the form of its tetrabutylammonium salt) in THF solution reached a complete conversion in just 2 min with only two equimolar of fluoride ion relative to the indicator 3 (Fig. 1). In contrast, cyclization of 2 to 2a was too slow to reach a complete conversion under similar conditions as for 3. The fluorescence emission intensity continued to increase over a period of several hours.8 It required more than 10-fold excess of fluoride ion to reach the saturation of the emission intensity within a reasonable period of time, i.e. 2-3 hours. 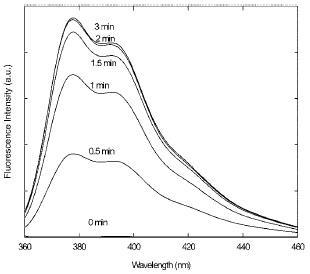 Scheme 5.A fluoride sensory polymer 8 and its cyclized form 8a.

To enhance its sensitivity of the indicator 2, we have incorporated our sensory system into a conjugated polymer (Scheme 5). The design feature of the sensory polymer 8 was to introduce a thiophene unit to bridge the sensory o-silyloxybenzylidene malonate moiety and the conjugated polymer.14

Although the reaction rate of the polymer 8 was expected to be somewhat lower than that of 2,15 the sensitivity of this sensory polymer to fluoride ion turned out to be sufficiently higher. Only 0.1 molar ratio of the fluoride ion (1.6 × 10-7 M of TBAF) relative to the sensory polymer 8 concentration (1.5 × 10-6 M in THF) was required to observe the fluorescence intensity maximum within a similar period of time (3 h) (Fig. 2). This result clearly indicated that the sensory polymer 8 was about 100 times more sensitive than its small molecule-based counterpart 2.16

The signal amplification by the use of the conjugated polymer can be explained by the energytransfer mechanism (known as Dexter energy transfer for small molecules) wherein activation of an indicator locally perturbs the band gap of the polymer. Hence in strongly electronically coupled conjugation schemes, only a few cyclization events induced by fluoride ion would produce local minima in the band gap that trap mobile excitons to give a new emission. The facile transport of excitons in conjugated polymers would allow to sample many transduction sites and therefore dramatically increase the probability of emission change. 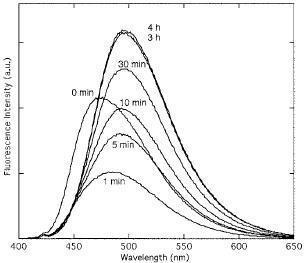 In addition, the effect of coumarin formation on the band gap of polymer 8 was readily monitored by inspecting the absorption and emission spectra before and after quantitative conversion to 8a by treatment with an excess of TBAF (Fig. 3 and Table 1). In other words, the sensory polymer 8 afforded a change in fluorescence from blue to blue-green and this change could be detected visually. This is because fluoride-induced cyclization events in the side-chains of the sensory polymer 8 produced local minima in the band gap of the conjugated polymer. The excitions were, then, recombined at these trapping sites, causing the new lower-energy emission, that is, fluoride-induced lactonization in the side chains produced a trapping site with a smaller band gap and recombination of excitons at that site resulted in a new emission. 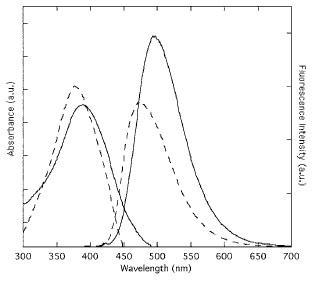 Melting points were determined using Büchi 510 melting point apparatus and uncorrected. IR spectra were recorded on a Nicolet MAGNA 560-FTIR spectrometer. 1H NMR spectra were recorded on a Bruker Advance DPX-300 and DPX-500 instruments using deuterochloroform as reference or internal deuterium lock. The chemical shift data for each signal are given in units of δ (ppm) relative to tetramethylsilane (TMS) where δ (TMS) = 0, and referenced to the solvent residual. 13C NMR spectra were recorded on a Bruker Advance-500 (125.7 MHz) instrument using internal deuterium lock and proton decoupling. Mass spectra were obtained on a JEOL JMS-AX505WA instrument. UV-visible absorption spectra and fluorescence spectra were measured with Hewlett Packard 8452A diode array spectrometer and SPEX Fluorolog-τ2 fluorometer (model FL 112, 450 W, xenon lamp), respectively, using spectral grade THF or CH2Cl2 as a solvent. The measurements were carried out at 25 ℃ using a quartz cell with a path length of 1 cm. The kinetic studies for the cyclization of the indicators 2 and 3 in dichloromethane were followed by measuring the fluorescence spectra after mixing 2 and 3, respectively, with TBAF in a quartz cell. The reaction was carried out at room temperature under the excess amount of TBAF (initial concentration [indicators]<<[TBAF]) and the reaction was expected to reach 100% conversion of 2 to 2a (and 3 to 3a). Separate solutions of different concentrations of 2 (and 3) with TBAF in THF were prepared and mixed to investigate the kinetics. In all cases, the concentration was low enough to maintain a UV absorption that was below 0.1. The rate of the cyclization was determined by fitting the fluorescence intensities of the samples to the Pseudo-First Order Equation (1): Ln(Fmax - Ft/Fmax) = −kt, where Ft and Fmax are the fluorescence intensities at the monitoring wavelengths at times t and the maxima values which are the last fluorescence intensities when the cyclization of the indicators (2 and 3) reached the conversion of 100%. The k is the apparent rate constant.

Reagents were purified and dried by standard technique. All air and water-sensitive synthetic manipulations were performed under a nitrogen atmosphere using standard Schlenk techniques.

We have introduced novel fluoride sensory systems and showed the possibility to amplify the response using the receptor-semiconductor conjugate. To our knowledge, this is the first example to use the fluoride-induced chemical cyclization reactions as fluoride-sensing systems. In addition, while most fluoride sensors known rely on changes in emission intensity, our sensory systems belong to few indicators which utilize new fluorescence signal.

As our strategies are based on the specific affinity of fluoride to silicon, they are highly selective for fluoride ion. Indeed, all the indicators developed were stable to an excess of chloride or iodide ion.

Other advantages of our sensory systems include the possibility to tune their colors by synthetic manipulation. We intend to prepare more elaborate systems to explore this possibility and also apply our approaches to other analytes of interest.